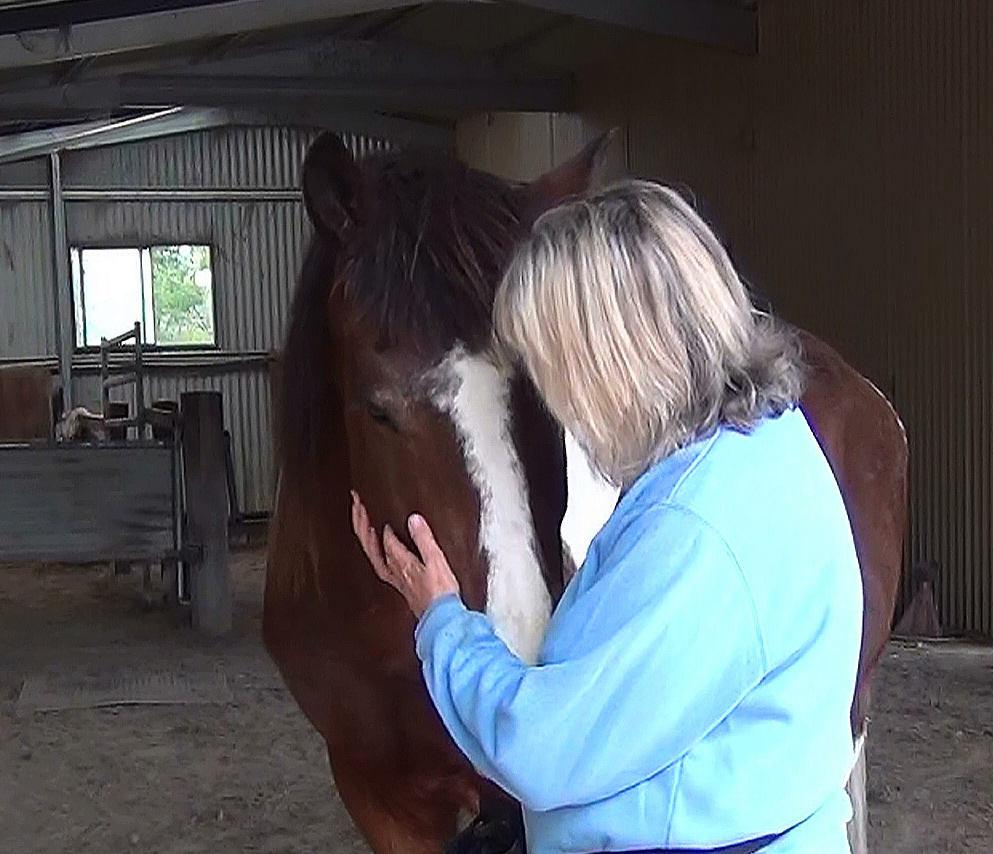 This word is used so often!  We all crave a connection with our animals.  In the horse world this term is bandied about by many equine professionals promising the earth!!

I learnt about connection with my horse Magnum and in order to describe connection here, I will talk about some of our journey.

He was untouchable when he came to us,  caught wild, taken to the sales – and ended up with us – because my daughter fell in love with him.

For years I sought help  – all to no avail – I wanted to be able to just walk up to him and touch him!!!  When I found positive reinforcement training,  things started to change.

Clicker training laid down a foundation from which to build the connection.  But it only began there….  When we started he was so tense – he wanted the reward, but he was trying to learn while being anxious with every move.  I had to strip it all back – the click would startle him – so I said a gentle ‘good’.  I asked for less – relaxing the mouth, blinking the eye, breathing out….. then I left him with treats.  It was ever so short.

That ‘space’ between the ‘doing’ is where I believe the real connection started to take place…..

Magnum had plenty of time to process the interaction.

Slowly the neck started to relax, the eye softened – I could touch him further and further along his back.  He was looking for me – he wanted more – but I had to be ever so careful not to layer clicker work over his underlying tension.

Kay Laurence pioneered ‘microshaping’.  Alexandra Kurland took it to the horse world.  I like to think I was working in ‘micro moves’…… these smallest of steps built not only his confidence, but stripped away his anxiety to reveal the most wonderful, loving horse.

The small steps enhanced my observational skills, and at the same time deepened  my empathy for him.  However, it wasn’t until I started teaching him how to pick up his hooves – and prepare him for hoof trimming – that I could confidently say we had a ‘connection’.

I had never trimmed a horse before –  and I was starting on Magnum!  I studied hoof trimming and then I went out and did small amounts of hoof lifting with him. I bought a hoof stand – and the first time he had his hoof on the stand I jumped for joy.  He was thrilled – and the hoof stand is still met with nickers!!! 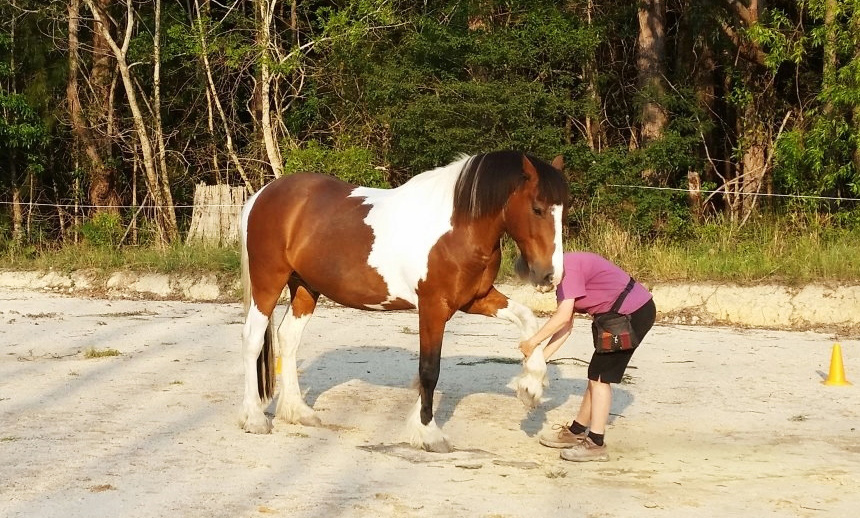 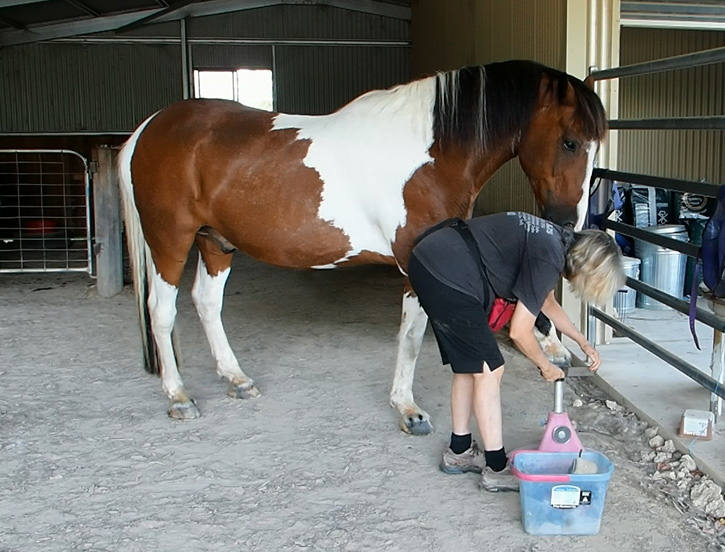 When I first saw his neglected hooves I cried – not only for him – but I cried because it was up to me to fix them for him.  I saw this moment as a ‘connection’ moment.  We were a team – we were learning together – and I believe that the success, for both of us, in the hoof trimming project,  has been our finest hour!!!

We were proud together – I think at times we ‘laughed’ together.  I learnt about all his sore spots – how he moved his body.  Our language deepened as he would remove one hoof and offer another – so he could rest muscles – I would move to whichever hoof he was comfortable with.  It was incredibly slow – but there was magic in the slowness.

On days when it was all too hard we would just ‘hug’.  I would abandon the trimming and we would do some other small thing to help his confidence.

The whole process changed so many other things – I could then touch him all over and under the belly.  He was okay with sprays (whereas before he would run away).  I had tried previously to introduce a spray very slowly and carefully – but without too much success.  Now he decided it was okay!  He would have cream on his nose – I could wipe his eye.  I could also use clippers on him so I could treat  his legs…….

And now I use a grinder on the hoof he cannot lift any more…….

Connection is built on mutual trust, empathy, understanding, communicating in a language both animal and human can understand – and for animals like Magnum ….. time……..

Having a connection is the most wonderful feeling – he is my friend – and if he were human I could see us sitting back, enjoying the surrounds – and reminiscing with photos about how far we have both come…. Being proud of ourselves  – and most importantly having a deep trust and love for each other… 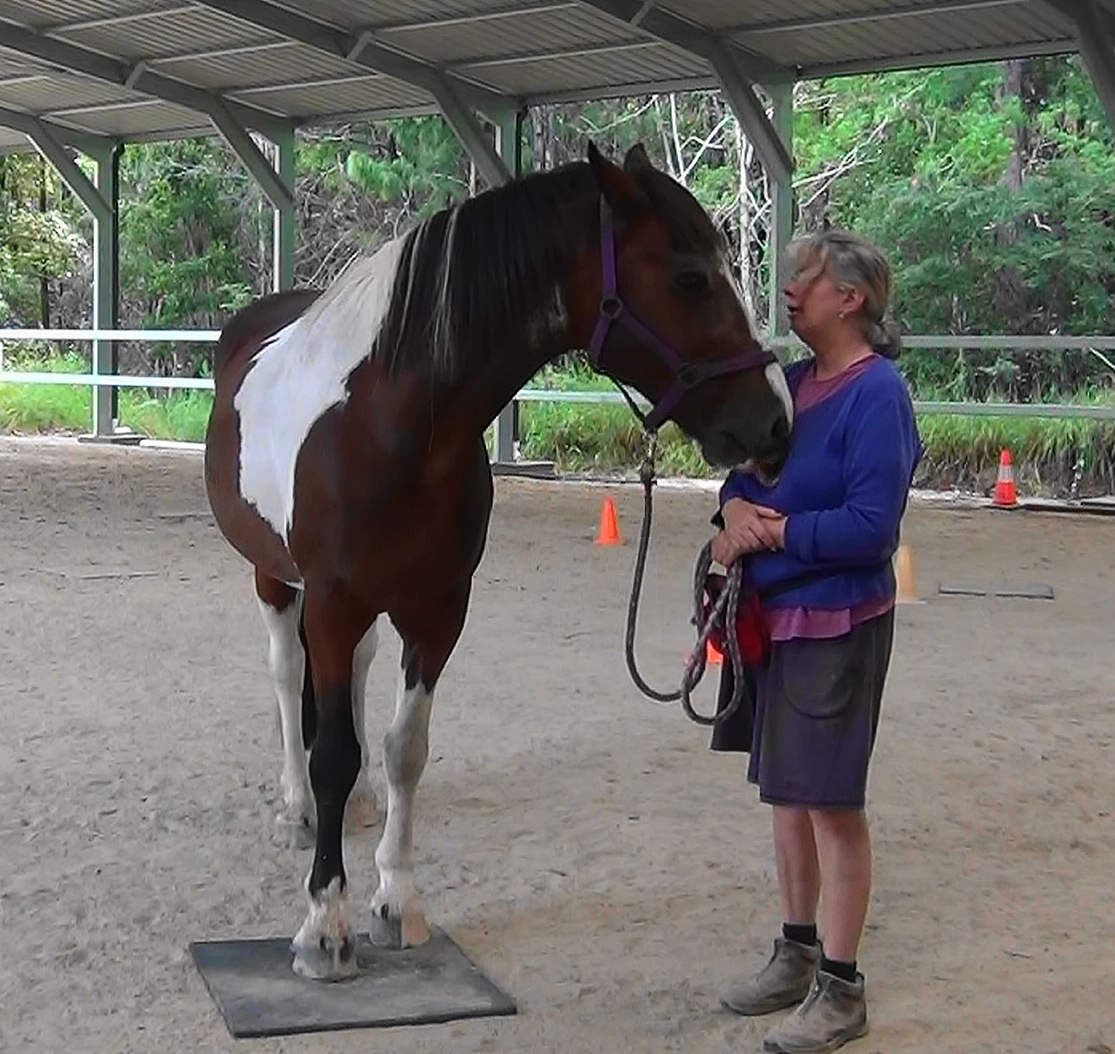 If you would like to read more about Heather and Magnum’s journey you can follow her blog.

Connection, as expression of trust, relationship, and finally of the deep attraction, which develops so easily between dogs and their human fellows, stains every single interaction and can be used as a potent reinforcer.

Read More
We use cookies on our website to give you the most relevant experience by remembering your preferences and repeat visits. By clicking “Accept”, you consent to the use of ALL the cookies.
Cookie settingsACCEPT
Manage consent

This website uses cookies to improve your experience while you navigate through the website. Out of these, the cookies that are categorized as necessary are stored on your browser as they are essential for the working of basic functionalities of the website. We also use third-party cookies that help us analyze and understand how you use this website. These cookies will be stored in your browser only with your consent. You also have the option to opt-out of these cookies. But opting out of some of these cookies may affect your browsing experience.
Necessary Always Enabled
Necessary cookies are absolutely essential for the website to function properly. These cookies ensure basic functionalities and security features of the website, anonymously.
SAVE & ACCEPT